Why DIR EN GREY continues to take the stage 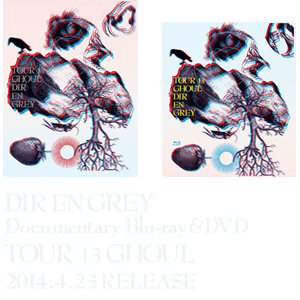 It has been 15 years since DIR EN GREY made their spectacular debut, and they are still continuing to progress. DIR EN GREY has just announced their fourth video documentary, TOUR13 GHOUL, with footage that documents DIR EN GREY face to face with reality, will be released on April 23, 2014. It features their domestic headlining tour beginning at YOKOHAMA BLITZ on September 18, 2013, where Kyo revealed his self-created, skull-like make-up that gave him the appearance of a ghoul starved for human flesh. The tour’s stage production invited audiences into the world of DIR EN GREY, while the band followed their instincts and laid themselves bare for the crowds. The documentary also includes their month-long American tour, from the fatal shooting at LAX on November 1 for which DIR EN GREY were present, to the looming possibility of cancelling shows due to a tour bus breakdown. The three months of filming captures on video anxiety about their new challenges, unimaginable realities, and a ray of hope at the end of hardship. Why take the stage? —— This is the film that documents the five members who repeatedly ponder this unanswerable question and fight their way through difficulty. Don’t miss their words and feelings from the inside.

***Please note that the included tracks, track listing and packaging detail may differ from the final product without prior notification.